We acknowledge that God has been walking with Aboriginal and Torres Strait Islander peoples, making his presence known through a continuous living culture over many thousands of years.

In particular we praise God for the Kaurna people who nurtured the land in our parish that we call home.

Saint Ignatius Church is situated on the north east corner of the intersection of Queen and William Streets, Norwood, South Australia.

When Charles Draper’s property, Cannonbury House, at the corner of William and Queen Streets was sold to the Jesuits in September, 1869, it consisted of a large block of land with a brick house of eight rooms, kitchen, lean-to, stable, coach house, garden and paddock.

The church was constructed on part of that large block of land and opened the following August. It was large and imposing, rectangular, built in the Italianate style with two towers topped by crosses at the entrance.

Outside the church was an Angelus bell, imported from Ireland in 1891, a gift of Mr Delano, a prominent parishioner.

In 1925, the Lourdes grotto was constructed. In 1929, Count O’Loughlin donated three marble statues to the parish. The statue of Blessed, (Saint, after canonisation in 1933) Bernadette is still at the grotto. The statues of Saint Ignatius and Saint Francis Xavier were inside the church for a time but are now on the Bellarmine Lawns at Saint Ignatius’ College, Athelstone and the garden to the rear of Manresa, Norwood, respectively. 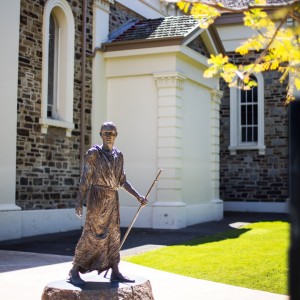 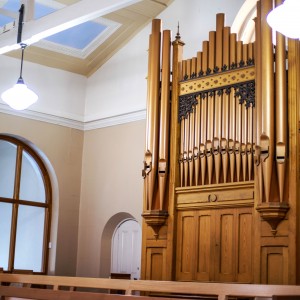 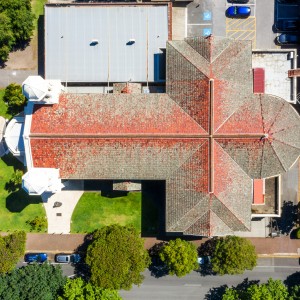 A sculpture of a pilgrim Inigo, completed in 2017, stands outside the entrance to the church.

In 1954, a magnitude 5.6 earthquake hit Adelaide, and the cross on top of the northern tower was dislodged. Parish priest Fr Thomas Costelloe S.J. decided to remove the cross from the southern tower rather than repair the other.

Inside the church, a fine organ was installed in 1897 in memory of Fr Joseph Peters S.J. The transepts, completed in 1954, doubled the capacity of the church. At this time, the sanctuary and sacristy were enlarged, and an altar rail measuring 25m. spanned the width of the church.

During 2019, a new sanctuary window, new pews and carpeting, along with marble high altar, marble blessed altar, lecturn and baptismal font were installed.